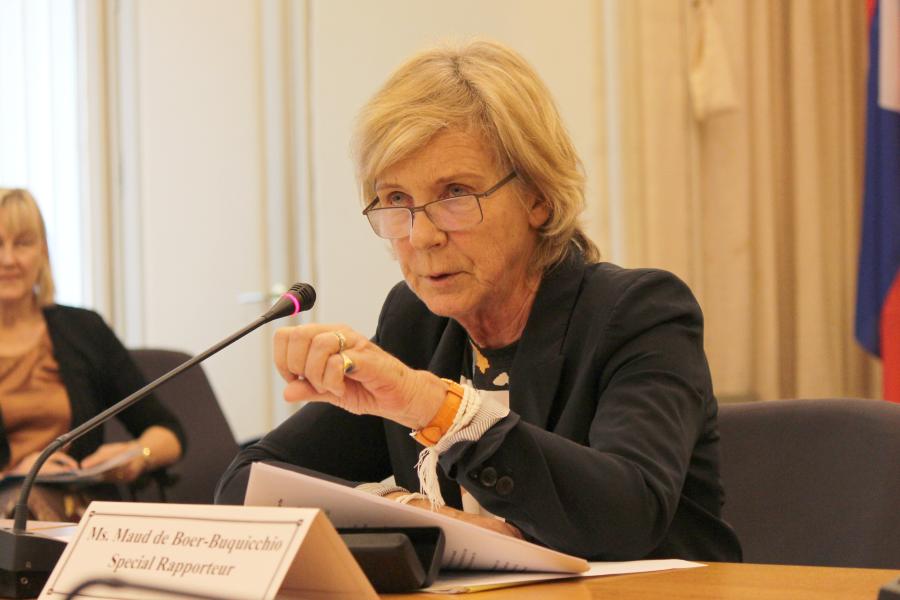 “I am pleased to see that Lao has taken a number of positive steps, such as incorporating international standards into its laws and policies, cooperating with the UN, combating trafficking through a new law, signing agreements with Thailand and China, and creating a number of shelters for victims,” said the UN Special Rapporteur on the sale and sexual exploitation of children, Maud de Boer-Buquicchio.

“However, I encourage the authorities not to overlook other forms of exploitation, including prostitution and online sexual abuse.”

Efforts to combat the sale and sexual exploitation of children had been limited by lack of funding, resources and data, the Special Rapporteur said. Urgent action was needed to tackle the lack of an integrated child protection system, and end the current impunity for people trafficking or exploiting children.

“There are no child-friendly mechanisms to report sexual abuse and exploitation, and no systems to refer child victims to support services. Moreover, while child victims are blamed for their situation, the exploiters continue acting with utter impunity, sometimes with the complicity of officials,” said Ms. De Boer-Buquicchio, in a statement at the end of her nine-day visit.

The Special Rapporteur praised promising initiatives by the Ministry of Labour and Social Welfare with the support of UNICEF and NGOs, such as the development of child protection networks in villages and districts, but said these were scattered and volunteer-based.

She called for fresh action including raising people’s awareness of the issues, better detection, support services including legal assistance, and budgetary prioritisation. She encouraged the Government not to lose opportunities offered by civil society actors and development partners to support the authorities in child rights and protection endeavours, and to increase these partnerships.

“Lao is investing tremendous efforts in its socio-economic development, including ensuring access to education for all children. However, unless these efforts take child rights and protection seriously, irregular migration – and the risks of sale and sexual exploitation - will continue to be children’s only coping mechanism,” she added. “If Lao PDR does not take care of its children, who will?”

The Special Rapporteur said victims of exploitation had told her they had not known where to turn for support, and had not known the risks they would encounter when trying to seek work abroad.

She highlighted the fact that many children were driven by poverty to neighbouring countries, in particular Thailand, leaving girls at particular risk of sexual exploitation and boys especially vulnerable to labour exploitation. Some Lao girls were being forced into prostitution in their own country, including in karaoke bars in cities and casinos in Special Economic Zones, a problem that was little-acknowledged but also needed urgent attention, she added.

Child and forced marriages were a particular issue among some ethnic groups in the Northern provinces bordering China, with girls either sold by their families or otherwise convinced to marry across the frontier.

And to help tackle the major problem of children in conflict with the law - most of whom are victims of drug abuse – the Special Rapporteur encouraged the use of prevention strategies such as social support, education and vocational training. In addition, she urged the authorities to shift the focus towards helping child victims and witnesses of trafficking and exploitation in judicial proceedings.

“These children are first of all victims, and deserve not to be retraumatised by inadequate justice proceedings” she said, thanking the government for enabling the first visit by a UN independent expert since 2008.

The Special Rapporteur will present a comprehensive report on her visit to a future session of the UN Human Rights Council.

Ms Maud de Boer-Buquicchio (Netherlands) was appointed Special Rapporteur on the sale and sexual exploitation of children by the UN Human Rights Council in May 2014 and her mandate was renewed in March 2017. She served as Deputy Secretary General of the Council of Europe between 2002 and 2012, where she spearheaded the adoption of the Council of Europe Convention on the Protection of Children from Sexual Exploitation and Sexual Abuse. She is the President of the European Federation for Missing and Exploited Children.