Round Table Meeting 2018: Midterm Review of the 8th NSEDP and Results of the PDNA as Main Points of Discussion 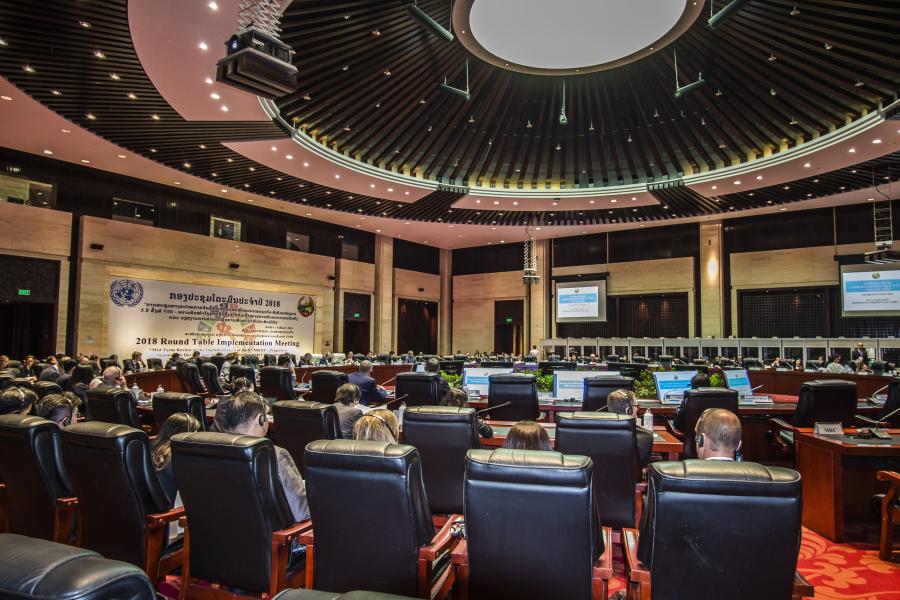 The meeting was organized under the theme: “Mid-Term Review of the Implementation of the 8th NSEDP – Progress in Sustainable Development and Effective Development Cooperation”, and focused on four key areas for dialogue:

During the policy-level meeting, which is also the official Roundtable Meeting 2018, the outcome of the Panel Discussions of the previous day was shared and a keynote on the Midterm Review of the 8th NSEDP as well as SDG localization and preparation and transition for LDC graduation was delivered.

Addressing the meeting, H.E. Mr. Somdy Douangdy, Deputy Prime Minister stated: “In 2018, the Lao PDR faced great challenges from heavy rainfalls and the resulting flood in addition to the Xepien-Xenamnoy Dam break Incident. According to the Post-Disaster Needs Assessment, the total damage is estimated at 371 million US Dollars. The Government of the Lao PDR has mobilized all of its available resources into the rehabilitation of the affected areas.”

In her remarks at the opening session, Mrs. Valerie Cliff, Director and Head of UNDP’s Regional Office for Asia and the Pacific in Bangkok and UNDP’s Deputy Regional Director for Asia and the Pacific highlighted the importance of focusing on the most vulnerable: “The cruel consequences of major natural disasters repeatedly show that it is the poorest and the most vulnerable members of the communities that suffer the most. If we are to be sincere to the objective of ‘leaving no-one behind’ and ‘reaching the farthest first’, our approaches to risk assessment and mitigation must be strengthened in those provinces and districts where vulnerabilities are greatest.”

H.E. Dr. Souphanh Keomixay, Minister of Planning and Investment informed the meeting that “As a result of internal and external factors, in addition to the Xepian-Xe Namnoy dam break incident as well as the heavy rainfalls throughout the country, the Lao PDR could achieve a GDP growth rate of 6.5% for the year 2018, which lower than the expected rate of 7%. Despite the ongoing challenges from the natural disaster mentioned above, we are still able to maintain a relatively high economic growth rate compared to other countries in the region. In particular the Government of the Lao PDR is able to maintain political stability, solidarity among its people and stable improvement of their livelihoods.”

Ms. Kaarina Immonen, UN Resident Coordinator and UNDP Resident Representative mentioned the results from Lao PDR’s first Voluntary National Review on Sustainable Development, presented at the United Nations in July, highlighting the need to address persistent inequalities: “Across all outcome areas of the 8th National Socio-Economic Development Plan, Lao PDR is still exposed to vulnerabilities at many different levels. Strengthening its resilience in the economic, social, institutional and environmental domains and addressing disparities and inequalities even more proactively are two core areas that resonate most closely to the 2030 Agenda for Sustainable Development.”

This year’s Round Table Meeting capitalized on Lao PDR’s green footprint, ensuring a paper- and plasticless event. Delegates received reusable cups and bottles instead of the usual single-use plastic bottles, and paper printouts were minimized.

The Round Table Implementation Meeting was held in a frank, open and inclusive manner, with constructive comments, underlining the importance of partnerships.

After the meeting, the Ministry of Planning and Investment will accompany heads of development partner delegations to pay a courtesy call to the Prime Minister of Lao PDR to report on the outcomes of the Round Table Implementation Meeting 2018.