UN75: Shaping the Future We Want together

The year of 2020 marks the 75th Anniversary of the United Nations (UN) and the 65th Anniversary of Lao PDR as a member to the organisation of member states. To commemorate the event, the UN in Lao PDR partnered with the Government and other stakeholders to launch the UN75 campaign with a series of events raising awareness of the vision and mission of the Organisation, calling for a renewed commitment to the principles of the Charter of the United Nations adopted on 24 October 1945.

On 26 October the Government of Lao PDR and the United Nations jointly organized a high-level commemorative event and lighted up the landmark monument of Patuxay in the bright colours of the 18 Sustainable Development Goals honouring the Agenda 2030 on a Sustainable Development for All -- a reinvigorated blueprint for peace and prosperity, for people and the planet, by 2030 under a renewed global partnership to end poverty, improve health and education, reduce inequality, and improve living standards, whilst simultaneously tackling climate change and protecting the environment.

Under the theme “The future we want, the United Nations we need: reaffirming our collective commitment to multilateralism”, the event was co-hosted by H.E. Mr. Saleumxay Kommasith, Foreign Minister of Lao PDR, and Ms. Sara Sekkenes, the United Nations Resident Coordinator to the Lao PDR.

Reflecting on the history of the United Nations, and the efforts needed now, H.E. Mr. Saleumxay Kommasith, noted that: “To list all the achievements of the UN will be too long. Nonetheless, the UN needs to be reformed and readjusted to make it fit for the current environment. It is the duty of member states to take responsibility to help make the UN strong and effectively deliver its roles and mandates. For the Lao PDR, we firmly believe that the UN as well as multilateralism are still valid and relevant in the current global context and the Lao PDR will continue to strongly support this course.”

Speaking of a more inter-dependent world, with a global web of trade, of investment, development and travel, connecting the fortunes – but also the potential losses – of us all, on a shared planet that must be protected and preserved also for future generations the UN Resident Coordinator spoke of the continued need for common approaches and shared institutions. She remarked that “the principles of sovereignty remain a hallmark of international cooperation, yet member States are interconnected and interdependent in ways that demand engagement, respect and empathy in a manner never experienced before.”

Representing a geographic and gender diverse group of states the ambassadors of Australia, Cuba, France, Timor-Leste, and the United Kingdom then took the floor reflecting on the history of the Organization and priorities ahead for the unifying dimensions of the 2030 Agenda of people, planet, prosperity, peace, and partnerships.

Featuring “The Future We Want” in Lao PDR, a short film clip highlighting voices of ethnic groups, persons with disabilities, persons belonging to the diverse group of LGBTIQ, religious affiliations and the youth. Representatives -- of these often referred to as vulnerable groups -- spoke on the better world they dream of and are dedicated to. The messages they delivered echoed key findings of the UN75 global survey calling for the UN to be more inclusive of the diversity of actors in the 21st century.

Artists made their interpretations of people, prosperity and peace showcased by the traditional Lao Folktales “Story of the Gourd” by Garavek and, “The Magic Goose” by the Khao Niew Theatre Group. Students from the National School of Performing Arts then shared a Duang Dao Lao Derm Music and Dance performance prepared especially for the UN Day named “People Living in Harmony”.

For the occasion, the United Nations in collaboration with the Ministry of Foreign Affairs updated a translation and produced copies of the UN Charter in the main Lao language distributing it as a memento to the participants of the event. As the constitutive instrument of the United Nations, the Charter carries a reaffirming message on the promotion of multilateralism on this special occasion.

Some 250 people participated in the event, including representatives of UN member states to the Lao PDR from the embassies of Australia, Brunei Darussalam, Cambodia, China, Cuba, France, Germany, Hungary, India, Indonesia, Japan, Republic of Korea, Kuwait, Luxembourg, Malaysia, Myanmar, the Philippines, the Russian Federation, Singapore, Switzerland, Timor Leste, Thailand, Turkey, the United Kingdom of Great Britain and Northern Ireland, Vietnam and the United States of America, as well as the delegation of the European Union.

Lao representation included from the Office of the Prime Minister, the Governor’s Office, the Ministries of Foreign Affairs, of Agriculture and Forestry, of Finance, of Home Affairs, of Industry and Commerce, of Justice, of Labour and Social Welfare, of Natural Resources and Environment, of Planning and Investment, of Education and Sports, of Public Works and Transport, of Health and of Public Security. Representatives also joined from the Lao National Chamber of Commerce and Industry, the Lao Women’s Union, the Supreme People’s Prosecutor, the National Assembly, the Lao National Front for Construction, the National University of Laos and the Bank of Laos. In addition to the representatives of the seventeen resident Agencies, Funds and Programmes of the UN Country Team in the Lao PDR the event also saw members of the private sector, civil society organizations and development partner agencies present in Lao PDR.

Participants then counted down together for the lighting of Patuxay in all the bright colours of the SDGs. Patuxay, literally meaning the Gate of Triumph, is a landmark monument in the centre of Vientiane.

The following day, nearly 200 UN staff celebrated at a UN Birthday Party across all agencies of the UN Country Team at the UN House in Vientiane, Lao PDR. With welcoming remarks Ms. Sara Sekkenes, UN Resident Coordinator expressed warm appreciation for the tireless work and unwavering dedication of staff delivering across the mandates of Agencies, Funds and Programmes known as the UN Development System on the ground, promoting the vision and mission of the UN.  The UN Country Team then jointly cut the birthday cakes during an evening full of joy and laughter as the UN staff enjoyed the photo opportunities of the Patuxay lighting up across the street in all the colours of the Sustainable Development Goals.

The UN75 campaign was launched in Lao PDR with wide public participation including the highly engaged Lao youth. A Lao Youth Radio interview series was launched in early September hosting ten Heads of UN Agencies, Funds and Programmes in Lao PDR including the UN Resident Coordinator, and representatives of FAO, UNAIDS, UNDP, UNFPA, UNICEF, UNIDO, UNV, WFP, and the WHO. Live streamed on Facebook, the interviews attracted great attention across the country and engaged audiences recording around 300,000 views, 1297 likes, 391shares and 421 comments as of 28 October 2020.

It further saw the 75th Anniversary commemorated in a joint Op-Ed, co-penned by H.E. Mr. Saleumxay Kommasith, Minister of Foreign Affairs of the Lao PDR and Ms. Sara Sekkenes, UN Resident Coordinator to the Lao PDR speaking to the priorities ahead.

The UN Communication Group further launched the UN75 social media cross-posting campaign through Facebook with the #ShapingTheFutureTogether and #FutureWeWant and promoted www.un75.online, engaging over 20 UN agencies, development partners and civil society organizations on joint messaging on the Future We Want and the UN We Need.

A UN75 photo gallery was created gathering photographic  contributions from the UN agencies and the Government showcasing the 65-year partnership between the country and the UN. Additionally, a new SDG Wall was set up at the entrance of the UN House to promote the 17 Global and the 18th unique SDG of Lao PDR on Lives Safe from UXO. 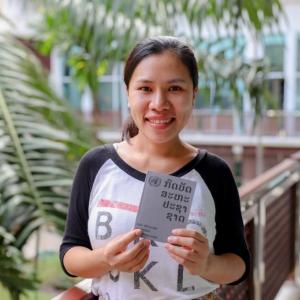